A long-standing myth surrounding the biofuels industry has centered on the “Food vs Fuel” debate, which claims that increased production of corn-based biofuels such as ethanol have led to higher food prices.

Such claims have been backed by the perception that the implementation of the Renewable Fuel Standard (RFS) and the Energy and Independent Security Act (EISA) in 2005 and 2007 led to a higher volume of corn produced for ethanol instead of for food and livestock feed purposes.

Among the biggest proponents of this theory includes global humanitarian and development organization, Oxfam International, which in 2008 claimed farmers were allocating more of their crop production for fuel than food in their drive for higher profits.

Furthermore, biofuel opponents believe the demand and production of ethanol has led to higher corn prices, which has resulted in higher food prices. Proponents of this theory often cite a 2008 World Bank report, which alleged biofuels had forced global food prices up by 75 percent in that year.

Most of these theories, however, aren’t supported by raw data from the U.S. Department of Agriculture (USDA) and have been refuted by newer studies.

In fact, data compiled by the USDA for 2021/22 marketing year estimates corn use for ethanol in the aforementioned marketing year to total 5.32 billion bushels while total corn supply is expected to reach 16.37 billion bushels. But 15.2 lbs of a 56 lbs bushel of corn is returned as dried distillers grains (DDG), 0.8 lbs is returned as corn oil while the rest is used to produce industrial CO2.

In a 2022 report by the University of Minnesota Extension, it said Minnesota converted 454.1 million bushels of corn in 2021 into 1.27 billion gallons of ethanol, 3.7 million tons of DDG and 332.2 million lbs of corn oil. More importantly, it said the 3.7 million tons of DDG were sufficient to meet sufficient to feed 1.8 million cows, 2.2 million pigs and 55.5 million turkeys and chickens. For context, Minnesota farms have 2.3 million cattle, 9.5 million pigs and 49.5 million head of poultry

There is also evidence that the linkage between ethanol and food prices have been overstated and even erroneous.

In an earlier report in June 2013 by ABF Economics, said an examination of food prices measured by the U.S. Consumer Price Index “indicates that retail level food prices have increased at a slower rate since the RFS took effect than during the comparable five years before the RFS.”

In addition, it said demand for ethanol wasn’t the biggest contributing factor for rising corn prices and pointed instead to the increase in gasoline prices and a higher global demand for food and agricultural commodities.

In particular, high gasoline prices impact the cost of farming while fertilizer and transportation costs strongly correlated to oil prices. These in turn, affect food prices.

Furthermore, the image below, which is based on the USDA’s Economic Research Service, illustrates where exactly a dollar for food goes to. 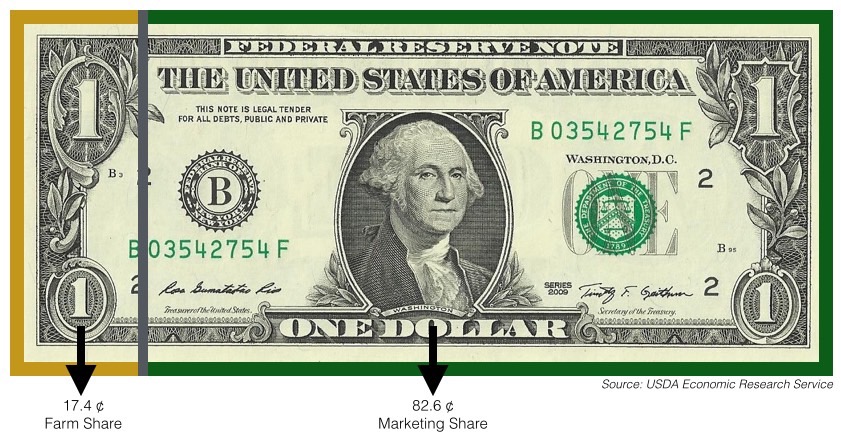 Even the World Bank has refuted claims it made in its aforementioned report in 2008. In a 2010 report, it said increased speculation in the commodities market by investment funds in 2008 was the real cause of higher food prices that year.

It specifically pointed out to data in 2008 that showed high corn prices even when ethanol use was on a downward trend. This, it said, was evidence that speculation in the commodities market, rather than ethanol production or demand, was the main contributor to higher food prices.