The Renewable Fuel Standard (RFS) was enacted to ensure transportation fuel in the United States contains a specific amount of biofuels. The idea behind this was to reduce America’s dependence on foreign oil, reduce gas prices and cut back on harmful carbon emissions.

Under the expanded program, the RFS included diesel while a goal was set to blend 36 billion gallons of renewable fuel such as ethanol into transportation fuel by 2022.

The goal of EISA was to “to move the United States toward greater energy independence and security, to increase the production of clean renewable fuels, to protect consumers, to increase the efficiency of products, buildings and vehicles, to promote research on and deploy greenhouse gas capture and storage options, and to improve the energy performance of the Federal Government, and for other purposes.”

In light of this, EISA established annual Renewable Volume Obligations (RVO) for refiners and importers of gasoline and diesel as a means to implement and achieve the goals of the RFS.

The RVO sets a minimum volume of renewable biofuel to be consumed as motor fuel. Renewable fuel is categorized as ethanol and advanced biofuels which includes cellulosic biofuel and biomass-based diesel, among others.

The following chart details the RVO targets for the United States until 2022. 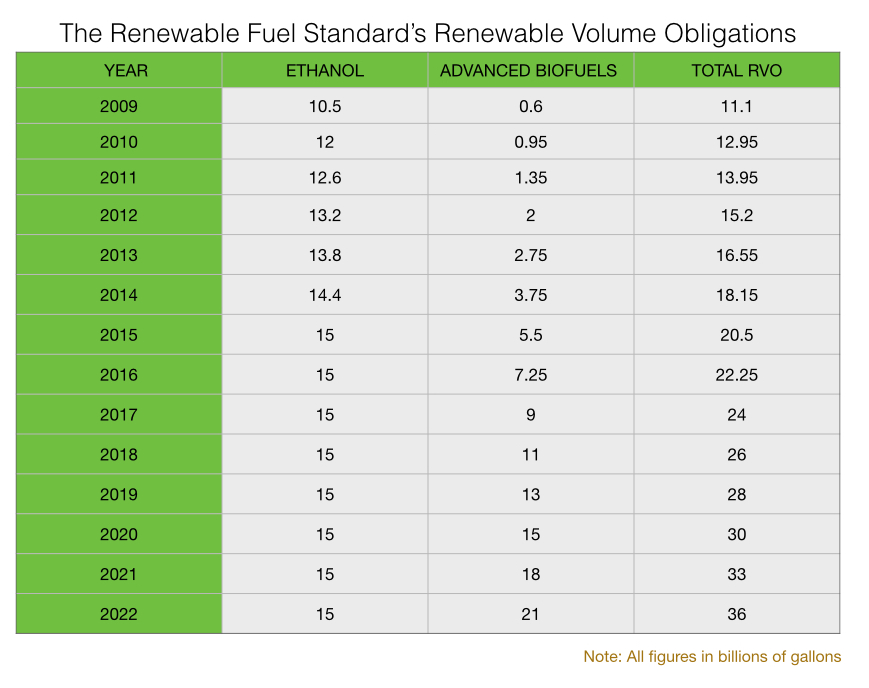 The RFS has been a resounding success with the volume of ethanol mixed with gasoline steadily increasing since 2005. In turn, America’s crude oil imports have been reduced, consumers have saved money at the pump and the air we breathe is cleaner than it was 10 years ago.

With the exception of the sale of non-oxygenated fuel used in marine equipment and small engines, ethanol comprised approximately 10% of all motor fuel consumed in America in 2013.

Thanks to the RFS, nearly all gasoline contains 10% ethanol which is also known as E10, which is a cleaner fuel that reduces pollution and that boosts the octane of regular unleaded gasoline.

Furthermore, other higher blends of ethanol have been introduced to the market such as E85 which is on average 80 cents to $1 cheaper per gallon than regular unleaded gasoline.